Can Small Monkeys be Pets?

Taking care of small monkeys isn’t an easy task, especially with their special health care restrictions. Although they are legal pets, considering buying one is a big decision, and you should deeply analyze how you and your naughty little friend will be able to cope and live happily in the same environment.

Other than this, small monkeys can sometimes be mean, and how do they show it? Well, they will pee on the couch. What worse revenge for not letting him eat his 23rd banana in a day, right? These animals do not like cuddling with humans and enjoy their own company amidst food and fun.

How much do small monkeys cost?

Small monkeys come with a hefty price tag swinging down their tails. If you wish to pet a young monkey that has been trained and being sold by a reputable breeder, it will cost you around $10,000. However, a slightly older monkey can typically cost about $5000-8000 bucks depending on the breeder, location, and temperament of the monkey.

With respect to their weight, they are pretty strong. They may lack the strength the big monkeys possess, but finger monkeys are strong enough to cling to the tree branches with ease.

The strong muscles and limbs allow these tiny creatures to jump and leap to about 5 meters. With a strong jaw and mouth, small monkeys can eat a number of foods, which would otherwise have been difficult considering their small mouth. Most of them have strong and flexible necks that can be rotated to great angles with ease.

Pygmy marmosets or finger monkeys are the smallest primates with grizzled brown fur mingled with light and contrasting dark shades. The back is somewhat black- a mix of grey and tawny brown, and the fleshy or the underparts are usually orange to pale white- their color helps them camouflage in their surroundings easily.

Unlike other monkeys, finger monkeys do not use their nonprehensile tail to grip onto tree branches and other things. The hands and feet with long, narrow, sickle-shaped nails help them grip and cling onto trees. They weigh merely 99 grams and 160 grams at the most, with a height of only 4 to 6 inches.

Finger monkeys have long teeth that allow them to feed on a number of things that would otherwise have been difficult, considering their tiny size.

In the wild, finger monkeys with their narrow teeth, pierce into the trees’ bark to suck on the sap. They also consume resin and vines of trees alongside gum and a variety of fleshy fruits. Consuming tropical flower nectar maybe their favorite past-time hobby fruit. Pygmies are omnivores that also feed on small insects like grasshoppers, butterflies, and arthropods such as spiders.

As a pet, finger monkeys can typically eat anything you do, from ice cream and pizza to mealworms and crickets. They always love a rewarding treat consisting of Arabic gum; however, apart from these, it is suggested to serve them fruits like bananas, papaya, mangoes, strawberries, and apples daily.

Finger Monkeys usually live in bamboo thickets and dense rain forests alongside rivers. Tropical rainforests and tropical evergreen forests are ideal homes for finger monkeys since it is easy for them to hide in such a habitat, thus preventing predatory attacks.

Finger Monkeys live in the Amazon region of Brazil, Ecuador, Peru, and Columbia. They can often be spotted on the edge of farms, which helps them search around the area for potential predators and food. 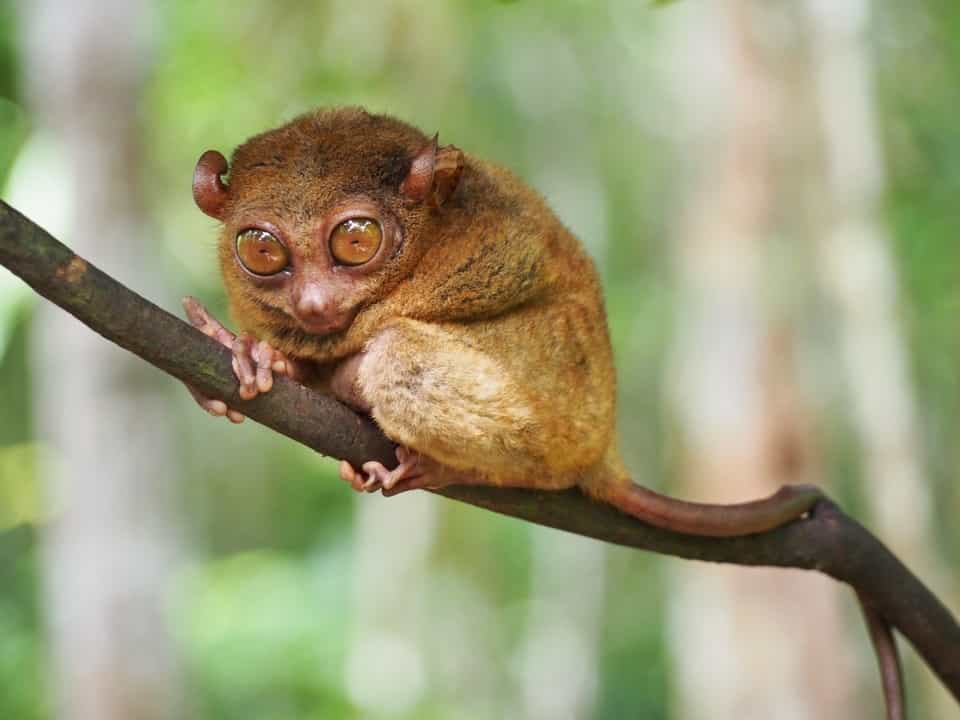 Tarsiers have thick, silky, and gray to dark brown colored fur. They have an unusually long ankle bone, a short body, and a round head, which they can rotate 180°. Some of their distinctive adaptations include independently moving membranous ears, which helps them to locate potential prey, large eyes and hand, padded fingertips, and a long tail.

They are carnivores, and their diet comprises small flying insects like locusts, beetles, and cicadas. Occasionally their diet may also include small invertebrates like lizards and bats.

Common Marmosets, also known as the white-eared marmoset, have their face covered with short hair, their coats are grey, dense with their tail having dark and light rings, and their ears have white tufts. The forelimbs of tarsiers are comparatively shorter than hind limbs, with elongated feet and hands.

They have some adaptations for their environment, including claws, which help them grasp tree bark and swing between the branches and trees. With their sharp incisors and canine teeth, they gnaw holes in trees to extract sap and gum for consumption. They have an average lifespan of 12 years, they weigh about 230-450g and are about 150-300mm in size with a tail length of 170-400mm.

They are omnivores who usually feed on small insects, spiders, snails, eggs, flowers, sap and gum from trees, and small animals like lizards. Their diet is very similar to that of pygmy marmosets, and they are also known as gum feeders for the large amount of gum they consume on a daily basis.

Tarsier can live in a wide variety of forest habitats, including Atlantic coastal forests, semi-deciduous forests, primary forests, riverine forests, scrub, and even in orchards and gardens. They are native only to east-central Brazil, but they have also been introduced into other areas and cities of Rio de Janeiro and Buenos Aires, Argentina. 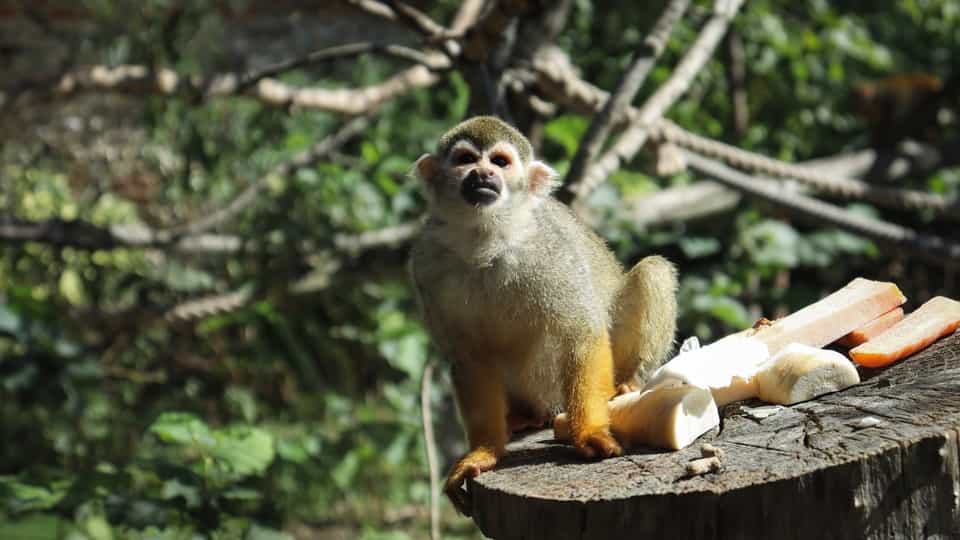 A Squirrel monkey is about 12 inches in length, with a long tail of 16 inches. They have short greyish coats with a slender and lithe build and have bright yellow legs. They possess nails in place of claws and have a nonprehensile tail.

They have some survival adaptations, including cheek teeth, which help them eat insects, and small thighs and lower legs for swift leaping. Squirrel Monkeys have an average lifespan of 25 years.

Squirrel Monkey prefers tropical rainforests, primary and secondary forests, gallery forests, and forest edges. They are found in the tropical rainforest of South America, Amazon Basin, Brazil, Colombia, French Guiana, Peru, and a small population in Florida, and some live in the Caribbean Islands.

Their bold markings, the off-white, or vibrant bright colors make it easy to distinguish them from the other monkeys. These monkeys are skinny and elegantly carry themselves with their long arms and legs. A short face and nonprehensile tail like tarsiers and pygmies make them look somewhat similar to them.

They have a soft and beautiful coat that is commonly grayish, reddish, brown, or yellow. They have large cheek pouches to store food, and it can store as much food as their stomach; their rump pads are of tough skin which cushions their rear end for sitting. Guenons are mostly diurnal animals that seek food while it’s still bright. They are about 42-55cm in length, weigh from 5-7 kg, and they live for more than 20-30 years.

A Guenon diet includes a variety of fruits, vegetables, lettuce, seeds, and insects. Guenons are slightly larger than most other small monkeys and eat small lizards and snakes and, most frequently, small mammals.

Like most of the guenon species, they are arboreal, living in the tropical forests and woodlands. They are found in Western and Central Africa.

Golden lion tamarins have a vibrant orange fun that is a sight to the sore eyes! Along with the thick fur, they have long hair dominantly forming the mane of their cheeks and throat. The face is comparatively darker than the body and lacks hair. Just like their close relatives, the marmosets have modified claws in place of nails.

Their average head to body length is 200-336mm, weigh around 370-780g; they live for upto 20 years or more. They have numerous adaptations, which include acute sight, hearing, a good sense of smell. Their claws are an excellent ecological adaptation that allows them to cling to vertical surfaces. They have slim and long nails with slender hands that help them look for food in constricted spaces.

They are omnivores, whose diet mainly consists of about 78% fruits, flowers, gum, and nectar. They also feast on crickets, spiders, birds and bird eggs, lizards, and other small insects.

These arboreal species live on trees at the height of 3-10 meters. They prefer primary and secondary lowland rainforests and are found in Southeastern Brazil’s Atlantic Coast.

Red-handed tamarins got their name because of their bright, reddish-golden hands, with their body covered in black fur and few reddish flecks around its neck. These small monkeys usually are 8-11 inches in length, weigh about 14-20 ounces; they may live for 10-16 years. Their joints act as shock absorbers that cushion them from the force of the fall, and it helps them to leap 60feet from trees to the ground.

Since they are omnivores, their diet consists of fruits, insects, flowers frogs, lizards, spiders, and nectar.

They live over a wide range of rainforests, primary and secondary forests, flooding forests, and many other open habitats. They are found in Brazil, Guyana, Suriname, and French Guiana. 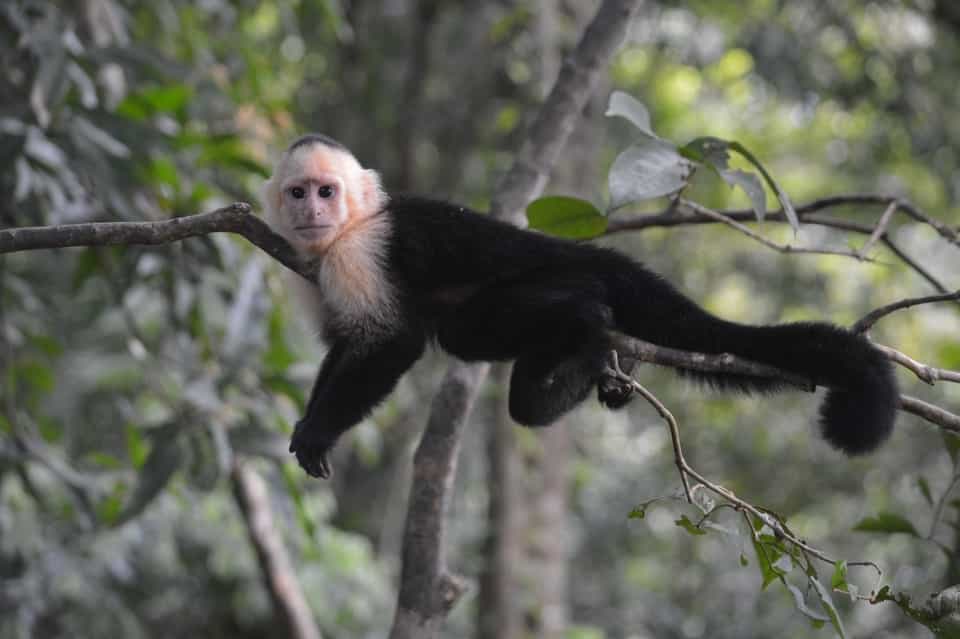 The Capuchin Monkeys are agile and lean; the color of their coat is dark brown with a light tan coloring around their face, neck, and shoulders. Their cute little faces are white to pink, their prehensile long hairy tail is flexible, and they can wrap it around branches. Capuchin Monkeys are about 30-56 cm in length, weigh around 1.5-4kg, and have a lifespan of 20 years.

Capuchin monkeys are omnivores and feed on eggs, bugs, fruits, vegetables, flowers, small mammals, and reptiles. Being diurnal, they search for their food and prey during the daytime.

Capuchins are all arboreal, and their prehensile tail helps them swing swiftly between the trees’ branches. They inhabit the low-lying forests, mountain forests, and rainforests, the areas with a wide variety of food sources. They are mainly found in Argentina, Brazil, Peru, Paraguay, South and Central America.

Why Does My Cat Sit On My Lap When I Poop?

How To Keep A Cone On A Cat?

How Much Do Sugar Gliders Cost? And Where to Buy Them?

Ravens & Crows as Pets? Everything You Need to Know