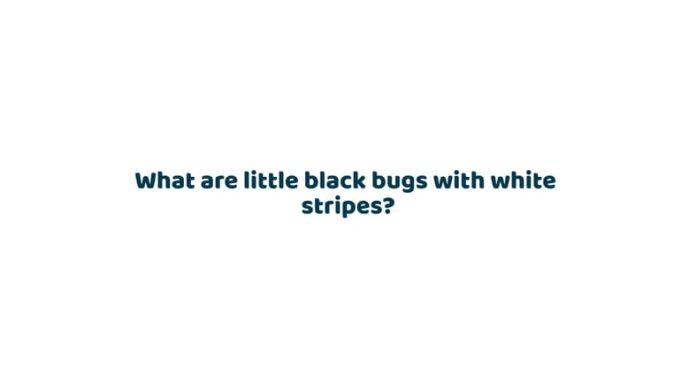 Did you recently see a black bug with white stripes crawling onto your heavily furnished expensive carpet, and it made you wonder what that bug is? Well, for your answer, the bug is called a Carpet Beetle. Carpet Beetles, as the name suggests, are a species of beetles that generally come in a number of varied colors.

In this post, we’ll discuss their diet, behavior, predators, and a lot more, but most importantly, we’ll also talk about getting rid of them for good.

Also known as furniture beetles, varied carpet beetles, or black carpet beetles, these bugs are rather small in size- between 2-5 mm in length. They may appear to be black or dark brown. Even though there are different kinds of carpet beetles, they generally share some common features, such as being oval and having distinctly short antennae that are clubbed together.

Furniture carpet beetles are easily identified based on the distinctive patterns of white and yellow scales that cover their body and thorax region.

Down their midline, you can see orange and red scales.

To identify varied carpet beetles, you need to look out for the irregular patterns of yellow, white, and brown scales. The younger beetles will have a more saturated appearance which fades with age.

Carpet beetles feed on a variety of different types of food products which includes animal products like skin, fur, feather, wool, and dead insects, other than feeding on cotton. Since synthetics are indigestible, carpet beetles don’t consume them in their larvae stage.

Carpet beetles are considered one of the common destructive bugs around the world. They can survive in different environments as they can feed on a wide variety of food items like fibers, plants, and animal-based food.

A carpet beetle has to go through several molting stages between larvae and adults. In the larvae stage, they are attracted to dark and warm environments, whereas in their adult stage, they are drawn to the light.

Carpet beetles can easily survive in both outdoor and indoor conditions, but the females generally prefer to lay eggs where there is sufficient food supply for the larvae to feed on. These parts mostly enter a house through doors, windows, or any other small openings.

They also inhabit nests of other birds or animals. They can be found in walls and chimneys where they feed on dead insects and animals.

Carpet beetles do not pose any actual threat to human beings besides being a constant source of annoyance. Both the adults as well as larvae tend to leave holes in the carpets, leather, silk, and feather garments. Furthermore, they tend to shed small bristle-like hairs that can irritate sensitive skin, as can their dead skins, which can even lead to dermatitis.

If you tend to spot any adult carpet beetle, you can be sure that the larvae are around as well. It might just be time to call pest control.

While most predators prey upon a variety of small bugs and beetles, larvae tend to be more susceptible than the adult carpet beetles to these predators. Some species of ants, spiders, etc., feed on carpet beetles and their larvae. The larvae, however, tend to have a few tricks up their sleeve and hide in crevices to avoid being caught.

Some of them are covered in dense hair coatings that render them inedible. So if you are thinking about hunting them down using their natural predators, it might not be the best idea. The problem is that most of the natural predators of carpet beetles are pests as well.

How to Get Rid of Carpet Beetles?

Getting rid of carpet beetles by yourself can be quite tricky as you need to focus on removing the adult larvae and eggs with much effort. It would be a pretty good idea to call in pest control as professional exterminators, and some of the following steps might not be as effective in getting rid of the eggs as they are with the adult beetles and larvae.

You will be able to source these locally, and they should be sprayed carefully into crevices, around baseboards, and in and around sinks to make sure you get the eggs as well. Do not spray this onto clothing or furniture or directly on carpets.

Dirt and food residues can be removed easily using vinegar sprays. You can use a combination of white or apple cider vinegar with water to make the spray or wipe the surface clean. Use it on shelves, curtains, cupboards, hangers, etc.

Dust boric acid in powder forms on carpets and furniture, and this acts as a mild insecticide. Leave the dust in place for up to 2-3 hours before vacuuming away the residue.

Wash all your clothes, towels, pillow covers, and linen using hot water and strong detergent. Wrap up the clothes that you plan to dispose of on account of them being too damaged in plastic bags and throw them into sealed garbage cans.

To start with, vacuum the areas thoroughly whether you have spotted the adult beetles there or not. Furniture, carpets, rugs- cover all the surfaces. Following this, steam clean the place to ensure you get rid of embedded eggs and larvae.

5 Most Commonly Occurring Beetles in the household

It will not be surprising to note that beetles comprise a significantly large population among insects, and they can be found in plenty in and around households. Some families of beetles are more populous than others and can be found in almost every household- be it on the carpets, woodwork, or gardens. However, they are all distinctly identifiable from one another and have very characteristic physical traits.

The Lady Beetle or Ladybug

Identifiable easily by the beautiful red and black patterns, this beetle can turn out to be quite useful in getting rid of pests that destroy crops, including aphids.

Not very harmful but notorious for leaving irregular holes in clothing and carpets, the larvae of these beetles can also lead to skin conditions like dermatitis in some people.

Ground beetles are commonly found in gardens and help get rid of pests that destroy your well-maintained gardens.

These furniture beetles are notoriously popular for eating through wooden furniture, and you can identify them through their clubbed antenna.

You are likely to find these beetles in stored products, and they can be found in the kitchen and pantry areas in plenty.

What’re the signs of a carpet beetle infestation?

Here is how you can determine if you have been infested by carpet beetles:

How did I get carpet beetles into my household?

It is most likely that they were brought along with an infested garment or material such as furniture or fur. They might have also entered through open doors or windows.

How to Identify a Queen Wasp?