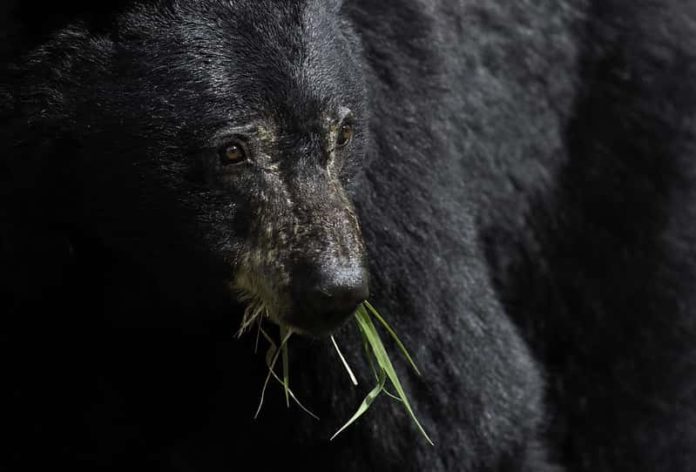 The gargantuan black bears are one of the biggest predators existing in the wild. These large, stocky animals weighing between 90 – 270 kgs eat a variety of food to maintain their large build and dominate the territory they live in. Although a black bear’s huge build, sharp claws, and teeth make it look terrifying (which it is), its diet mostly consists of green plants and vegetables. Apart from these, the black bear also frequently feeds on grubs, insects, etc. Below is a detailed guide on what a black bear eats and a lot more.

Where are Black Bears found?

American Black Bears are found most commonly in North America and in other geographical regions like Canada, the USA, and Mexico. In the United States, they can be found in the east, and along the west coast, and in the Rocky Mountains. Since black bears have a highly adjustable and versatile diet, they can survive and are found in a variety of disparate and contrasting habitats, including coniferous and deciduous forests.

The population of Black Bears and American Black bears has been effectively increased due to conservation efforts. Their population has also increased in human populations, because of the human foods and refuse. But this can cause conflicts since they are exceptionally strong, and large animals cause fear and immense damage. Though the coexistence of humans and bears is no longer desirable, humans should be responsible for the bear population. The coexistence of humans and bears to exist in a safe and uninterrupted space can be ensured by taking certain measures.

Here is what animals black bears eat in different categories such as reptiles, mammals, etc.

Bears living in south countries like Louisiana and Florida have been found feeding on reptiles like young alligators and on unhatched eggs. Other than reptiles, they also feed on amphibians like frogs which is a small portion of their diet.

Black bears are carnivores who are capable of taking down hoofed mammals and generally feed on young caribou, deer, elk, and moose. They hunt down mostly the young and injured mammals to avoid risks of injury before long hibernation. They are well aware of the areas where these mammals give birth to their young ones, and they hunt deliberately in those areas year after year. They also feed on mammals, including beavers, bobcats, coyotes, wolves, red foxes, mice, and ground squirrels.

American Black bears are well-known carrion eaters who chase other animals away from the kill. They eat dead animals like caribou, elk, and deer who couldn’t survive winter. The carcasses are the ultimate source of protein that helps the bear to survive the long winter sleep.

Grizzly bears are often found feeding on black bears, and they don’t turn down any opportunity to eat. And in some areas, they also indulge in cannibalism and eat young and female bears in some areas.

A variety of insects and worms are consumed by bears, and they are an important source of high protein that supplements their diet. Black bears love feasting on larvae, moths, grubs, and beetles. Bears also dig up ants and earthworms, which make up a small part of their diet. Among all these insects, ants are their favorite food and are eaten in great quality, along with young in pupal and larval stages.

Bears raid and feed on honey; it is the most common belief which is true. Bears feed on bees and wasps, and they raid the beehives mainly in search of bees along with the larvae.

Tree climbing adaptation helps black bears, and American Black bears to climb up trees and feed on eggs and newly hatched birds from the nests. They feed on various types of birds, including ducks, geese, and grouse. In general, they mostly feed on eggs and chicks from ground-nesting birds.

Black Bears, especially American Black bears, feed on various types of fishes depending upon the geographical location. Bears in the Western Pacific Coast feed on salmon that inhabit the waters of these areas. Some hungry bears may catch shallow-water fishes like carp and catfish to feed themselves.

Although a black bear is omnivorous, a major part of its diet consists of plants, sometimes 90% of the diet. Black Bears eat fruits, trees, shrubs, and plants. Fruits, such as berries – blackberries, huckleberries, elderberries, strawberries, chokeberries, blueberries, and raspberries are a crucial part of a bear’s diet.

Some black bears living close to farms can eat more than 30,000 berries a year. Bears also eat flowering plants such as lilies and fireweed. Apart from these, they feast on rose hips, plums, apples, pins, sarsaparilla, currants, and cherries too.

Since bears generally avoid wasting energy in digging up the soil for tubers and rooted foods, Black Bears eat large amounts of alfalfa, dandelions, roots, tubers, and clovers. Black Bears enjoy clovers since they are soft and easy to digest. During the spring, bears feed on broad-leafed soft leaves since, upon re-emergence from hibernation, a black bear’s stomach takes time to re-adjust to digesting and general functioning.

Black Bears live in coniferous and deciduous habitats, which gives them access to a variety of nuts such as hazelnuts, beechnuts, acorns, and mountain ash. Apart from these, they feed on numerous other shrub species that are abundantly available in both deciduous and coniferous habitats.

During spring, bears also feed on catkins and aspen leaves and flowers right after the leaves are burst, or the plants are flowering. The reason behind this is the fact that it is during flowering and bursting that flowers and plants have the highest protein content and less cellulose (which is hard to digest).

During summer and fall, bears travel considerable distances to oak and beech stands to enjoy these when they are abundantly available in their naturally occurring habitat.

What do black bears eat in the wild?

In the wild, Black Bears keep moving from one habitat to another throughout the year, and they feed on vegetation, insects, and other low-calorie food sources that they find. The major portion of their diet is mainly made up of plant foods, sometimes as high as 90% of the black bear diet is plant and greens.

Fish and meat is also an important source of fat and protein to the bears other than plant foods. Non-coastal bears are often found feeding on carrion and winter-killed animals. Bears are also an effective predator on young elk, moose, deer, and caribou in the wild. Some of them live in areas where they find salmon, suckers, and eggs of other fish for part of each year.

What do Black Bears eat in Different Seasons?

Black Bears, in the wild, have an inconsistent diet that keeps changing depending on the seasons. The reproductive health of both male and female bears depends on the availability of food in the summer and fall. So, what do Black Bears eat in spring, summer, fall, and winter?

Spring is that time of the year when food is in short supply for the bears, and they continue to lose weight until June. Bears feed on the grass at a lower elevation, while other trees and shrubs would leaf only after another month. Bears have been often found foraging, during this time for food on sunny, south-facing slopes where they can scavenge on dead animals or eat overwintered berries.

Long claws and powerful shoulders of the bears help them in digging for sweet-vetch roots, glacier lily bulbs, and some other starch-rich foods. Roots of skunk cabbage and sedges are consumed by black bears in large quantities. In the coastal areas, they eat salmon that died the previous fall after spawning.

In summer, bears are found searching for greenery in places like wet meadows, on avalanche slopes, in aspen forests, and at marsh edges. Bears living near human habitation mostly graze on areas like golf courses, ski runs, parks, and other green grass areas. They grumble for ants and beetle larvae as the summer progresses.

In late summer, they are found feasting on different berries like huckleberries, blueberries, and other high-energy food. They forage fruit trees and berry bushes in urban areas.

Both black and grizzly bears pack on as much fat as they can in order to survive the long winter sleep, during fall which is a critical time for both. With the first heavy frost, the food supplies begin to dwindle, bears living in the coastal areas feed on spawning fish, others search for greenery near water, and they also feed on guy piles and wounded animals left by hunters.

Bears rest in their winter dens as the snow starts covering their dens, and the winter rain begins in earnest. During this denning time, some of them leave their dens and feed on winter-killed animals. However, the bears living in lower latitudes don’t hibernate as they get food throughout the year, and urban black bears living near human civilization have learned to feed on birdseed, pet food, and garbage during winter, and hence they don’t need to hibernate.

How do bear hunt?

The black bear has an immensely strong forepaw that it uses to kill the prey. The forepaw is strong enough to break an animal’s spine, or the Black Bears bite their prey either in the neck or the dorsal part, mostly the back. With sharp canines, an attack on the neck is mostly fatal. Since bears also hunt animals that have a snout, they aim at the snout and seriously injure the animal.

Next, the bear starts eating the prey from the chest region or the entrails before moving to other parts of the body. Since Black Bears feed on carcasses, they also have an ‘art’ of storing it – they bury it in a place that goes unnoticed and then covers it up with moss, soil and other naturally found covers such as sprigs or even running water.