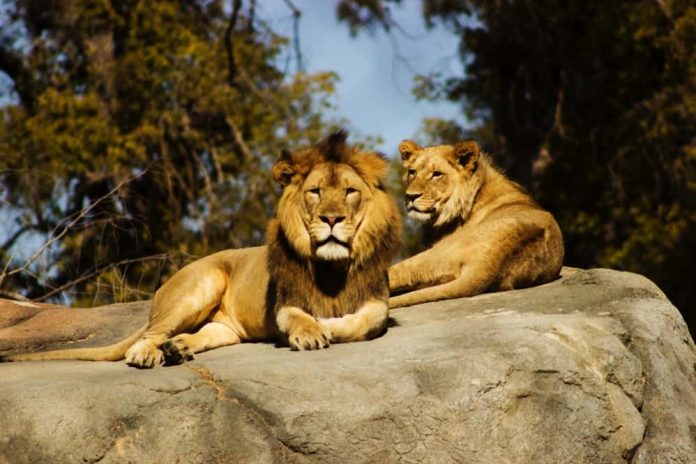 The word ” Terrestrial,” which means earthly, is borrowed from the Latin word ‘terra,’ meaning earth, land, or ground, with the suffix -al. The terrestrial animals are the animals that live predominantly or entirely on land, and they also grow and reproduce on land. Having successfully adapted to dry environments, animals belonging to this habitat have completely abandoned their need for an aquatic phase in their lifespan.

Here is a shortlist of terrestrial animals: 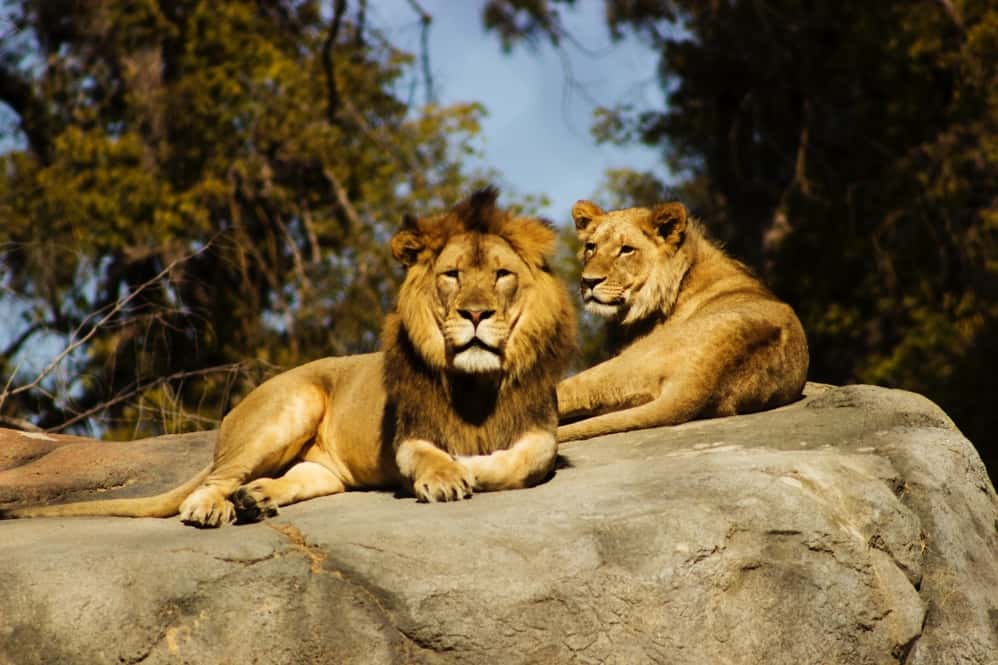 Deep-chested build, tiny round ears, a fuller mane, and a heavy furry tuft at the ledge are the main physical characteristics of a lion. The fur of lions varies in color from light buff to silver-gray, yellowish red, and dark brown.

The males have a prominent mane, typically brownish and tinged with yellow, rust, and black hair that grows downward and backward, covering most of the head, neck, shoulders, and muscular chest. The average head to body length of a male lion is about 190-210 cm, whereas the female ones have a length of 160-189 cm.

Lions are deadly predators who have a short and powerful attack, and they catch their prey with a fast rush and final leap. Lions usually hunt zebra, giraffe, African buffalo, and blue wildebeest.

They are mostly active at night, and they prefer habitat consisting of grassland, savanna, dense scrub, open woodland. Lions are found in sub-Saharan Africa, and a small population of Asiatic lions is found in India’s Gir forest.

These adorable fuzzballs are one of the most ubiquitous domestic animals in the world. The anatomy of dogs differs from breed to breed; they have powerful muscles, a cardiovascular system supporting sprinting and endurance, and teeth to capture, hold and tear.

They regulate their body temperature through panting and sweating via their paws. They have an incredible hearing ability – the frequency range of dog hearing is between 16-40 Hz and up to 45-60 Hz. The amazing part is the number of smell-sensitive receptors is forty times more than humans. 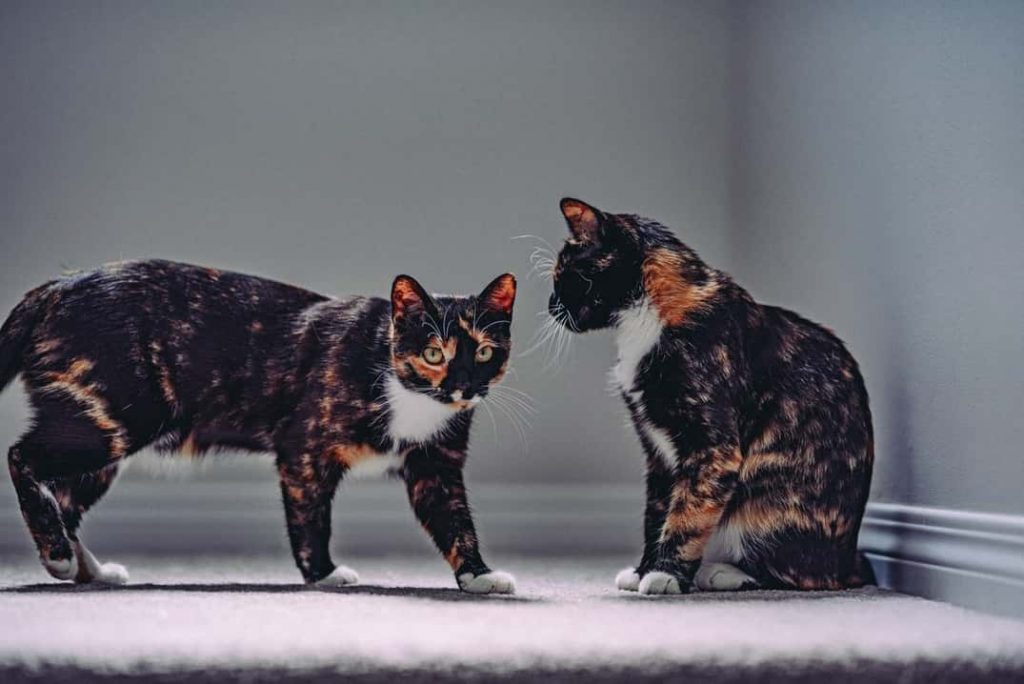 Cats are the domestic species of small carnivorous mammals, and they can be either house cats, farm cats, or feral cats. They are domesticated by human beings for companionship and also for their ability to hunt rodents.

Though cats are social species, they are solitary hunters and are mostly active at dawn and dusk.

Moooo! These beautiful and big blocky hooded terrestrials are great swimmers. Herbivorous in their diet, cows usually feed on grass, just like all other cattle animals.

Yes, moving on, the mammals have a gestation period of 283 days, and their lifespan can be anywhere between 18-22 years. 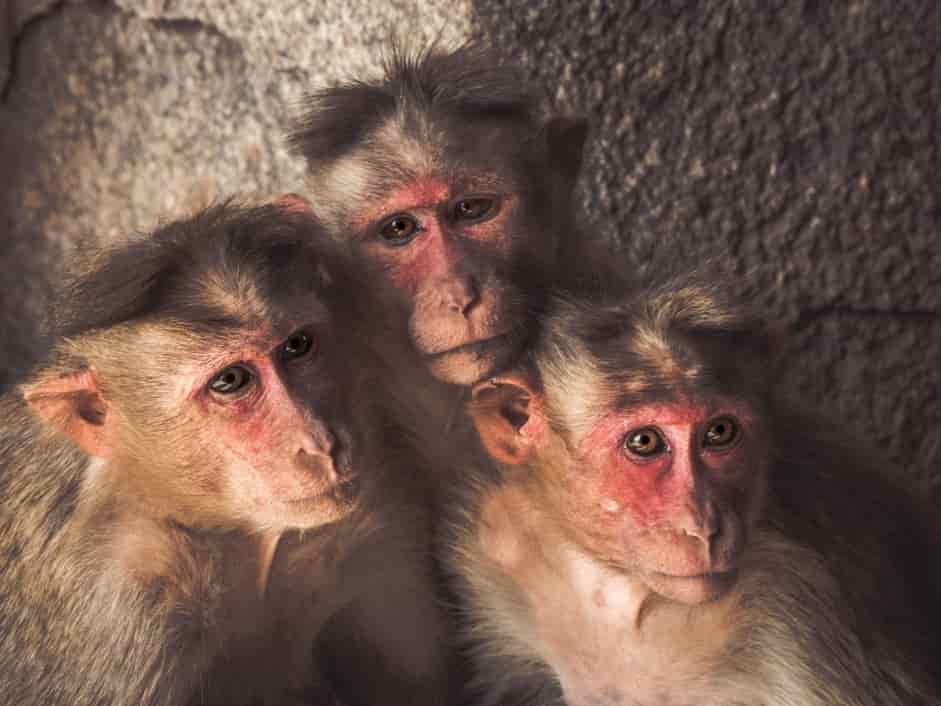 Monkeys are mammals; some monkeys live on the ground, and some inhabit the trees. Many small monkeys are kept as exotic pets for their adorable look, a common example being pygmy marmosets.

Their bodies are designed to provide them both strength and agility, which makes them flexible and fast. Monkeys are extremely intelligent and social creatures since socialization is important for them to survive in their environment.

There are more than 350 species of primates found all over from the habitats in Asia, Africa, and South America. 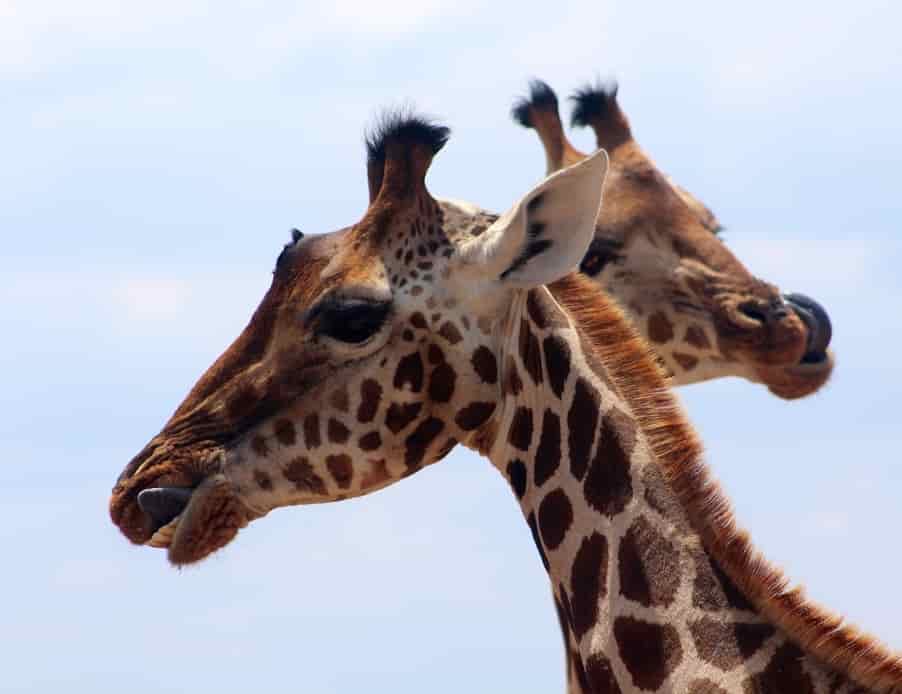 Giraffes are regarded as the tallest living terrestrial animals, with long necks, legs, and a unique coat pattern that serves as camouflage.

The interesting feature in their body is the ossicones that are usually mistaken as horns.

But what’s the story behind these ossicones, and why do they exist in the first place? Learn more about it in our article: Why Do Giraffes Have Horns?

Their diet consists of leaves, fruits, and flowers of woody plants like acacia. They have a long purple colored Prehensile tongue of about 45cm in length. The average height of a Giraffe is around 5m; they are mostly found in the sub-Saharan region of Africa. 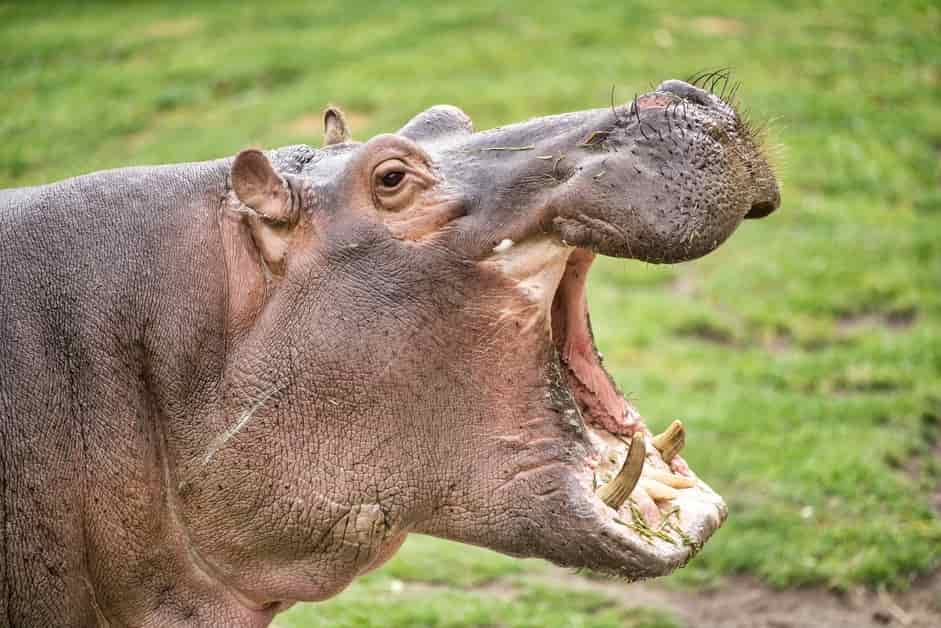 Deriving their name from the Greek word, translating to ‘river horse’ hippos are one of the heaviest terrestrial animals on earth. These creatures are the heaviest animals on the land, next to elephants. Although they are also termed as ‘semi-aquatic,’ they are generally leagued into the terrestrial category.

These mammals are mostly herbivorous with a lifespan of 40-50 years, and although they are exaggeratingly heavy and fleshy, they can run at a speed of 48 km/hour on the land.

Seemingly serene and calm, these 8000 pounds creatures shouldn’t be messed with because they are just as dangerous as a wild elephant that’s gone frenzy. 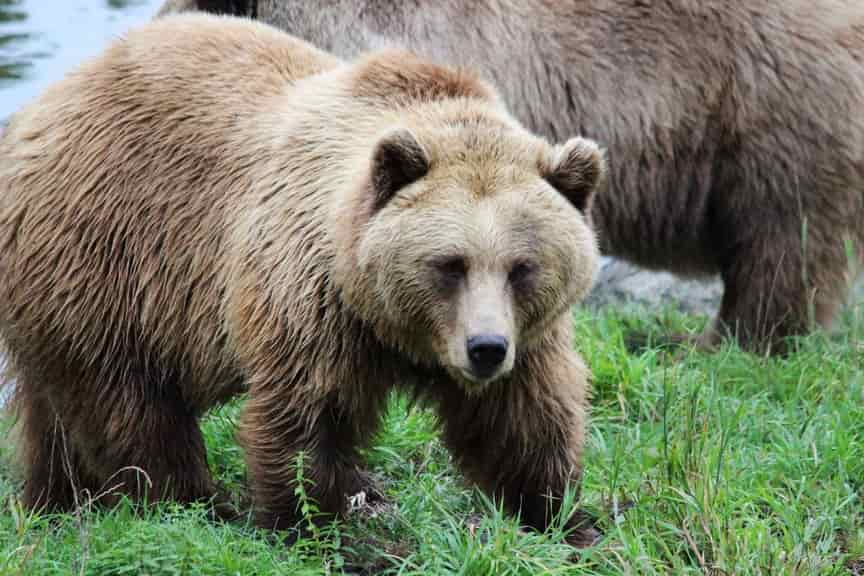 Bears are the large solitary, stocky mammals equipped with nonretractable claws, shaggy fur and are about 8 feet long and weigh about 60-1600 pounds. They are extensively found in America, Europe, and Asia.

They can hibernate, which is an effective survival solution. Bears are great swimmers, which allows them to survive in near the coldest of oceans. Despite the bulky build that bears possess, they are incredible climbers and adept runners. 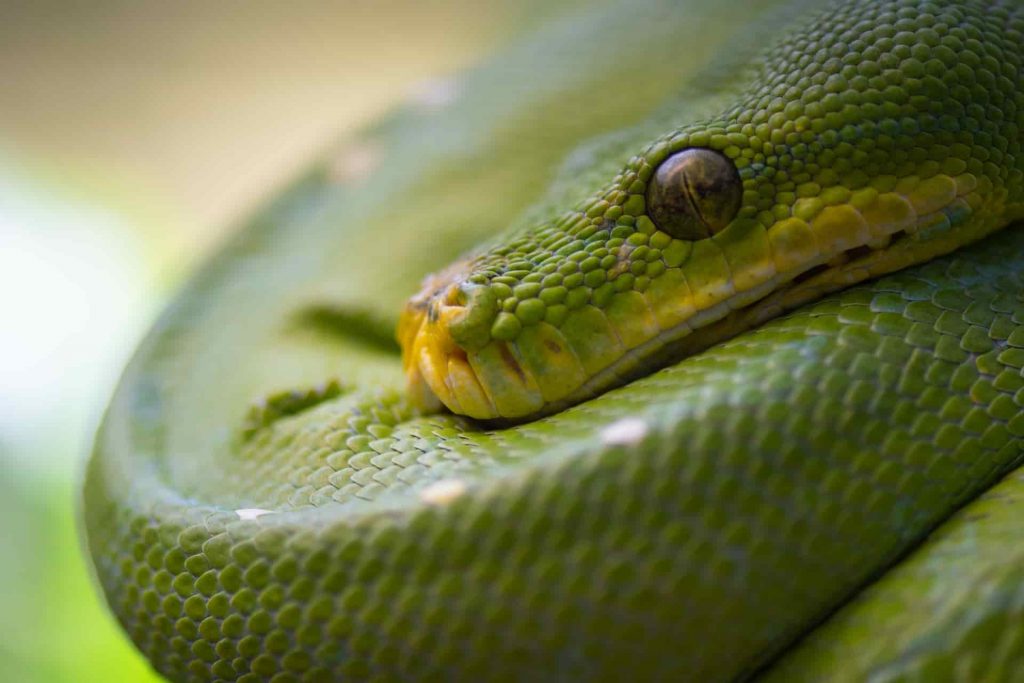 Although controversial, snakes that have adapted to both land and water are majorly considered terrestrial animals. These infamous reptiles known for their toxic venoms or constrictions around their prey’s body are found all over the world except for a few parts like New Zealand, Antarctic, and Ireland, etc.

The legless carnivorous reptiles that come in absolutely mesmerizing patterns and colors from jet black to light green are ectothermic creatures with a rough, scaly body. If you see one, and unless you are pretty sure it’s a house snake – RUN! 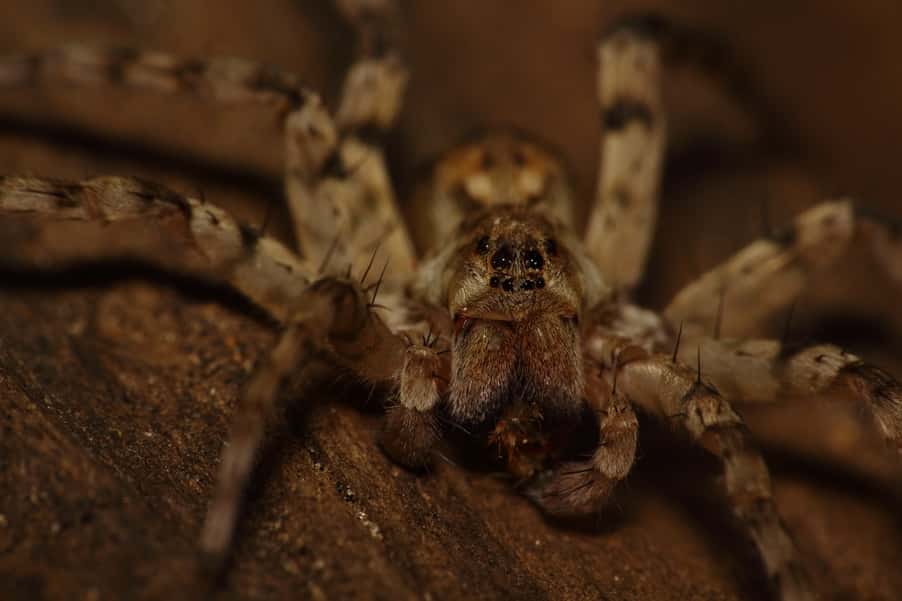 Yes, the eight-legged animals that usually form those incessant webs in your home.

Although the house spiders are usually harmless, these arthropods can prove lethal, especially a few species with the Tarantula reigning on top. A few spiders that look tiny have a VERY lethal bite of some of the deadliest toxins ever heard of in the history of mankind.

The mainstream people have a general misconception about spiders – they think they are obnoxious to look at! Wait till you look at the iridescent, electric-blue legged spider that has been winning our hearts (although it is a little frightening to look at).

Terrestrial birds are those that forage, roost, and predominantly spend a significant portion of their lives on the ground. When these types of birds are threatened, then they don’t fly away; rather, they freeze, walk or run. Some of these birds have a unique cumbersome flight style, which is less suited for long flights, and when flying, they generally stay low above the ground while the others are flightless.

Other types of animal habitat

Apart from terrestrial, there are four other habitats, namely.

Let’s learn more about them with examples in detail…

In simple words, animals that primarily live in either freshwater or saltwater are called aquatic animals. The presence or absence of a spiny backbone is an important feature that helps to distinguish and differentiate between different animals living on land and in water.

Marine Mammals like cetaceans, whales, and dolphins have adapted to drive deeply before surfacing for air, and they don’t lay eggs. Rather they give birth to their young ones.

Animals that thrive when airborne, accomplishing other activities like feeding, drinking, and bathing, spending much of their life in flight are called Aerial Animals. There are several adaptations that were adapted by these animals to fly swiftly in the air.

These adaptations include their lightweight skeletons and slender, streamlined bodies, which increase the flight efficiency and make lengthy flights easier for them, the long and pointed wings serve to aid their flight agility, and their long tail helps them to steer while flying in the air easily.

Since these animals have an amazing flight style, aeronautics and mechanical engineers are studying their flying patterns and developing myriad flying vehicles and machines from commercial aircraft to remote-controlled drones.

The arboreal animals are the tree-living animals who spend most part of their life cycle on trees and branches, mainly in the rainforest. These animals have amazing adaptations that not only help them to live and move about in trees but also help them to survive and hide in the environment.

To deal with the mechanical challenges of moving through their habitats, the arboreal animals have elongated limbs, which help them to cross gaps, testing the firmness of support ahead, and to reach food and other resources.

They use their prehensile tails to grasp the branches of trees. Animals like spider monkeys and crested geckos have an adhesive pad at the tip of the tail to provide increased friction.

Their small body size provides them with advantages like increased stability, lower mass, controlled gliding, and gives them the ability to move through more cluttered habitat amidst branches, stems, leaves, etc.

To live a double life – that succinctly describes Amphibians, in a nutshell. The amphibious animals are cold-blooded vertebrate animals who are born in water and breathe through gills in their larva stage, and as they grow adult, their lungs develop the ability to breathe air, allowing them to live on both land and water.

They have skin glands that help to transport water, oxygen, and carbon dioxide into or out of them, producing useful proteins. They are also frequently used as a defense to fight against bacteria or fungal infections.

The toxic amphibians are mostly bright colored to warn the potential predators from coming in close vicinity. Their skin needs special environmental conditions in order to allow them to survive, and too much exposure to the sun can damage their skin cells.

Wind can also dry their skin and dehydrate them, which is why most amphibians are nocturnal, surfacing, and preying only in the dark. The amphibians inhabit a variety of habitats, including terrestrial, fossorial, freshwater ecosystems.

The list of some commonly known amphibians are as follows: