Have you ever had something really important to say that you had been thinking about all day, but just when it was the right time, you forgot half of what you were supposed to be saying? Maybe you were well-prepared for your exams but couldn’t seem to recall even half of what you learned staying up all night? Come on; we have all been there!

The simple answer to retaining information and using it in the future is memory. It is how good we retain and use information when needed determines how good our memory is. Now, we humans may consider ourselves to be the most intelligent creatures on the planet (which we are, obviously), but have you ever wondered which other creatures have excellent memory powered with great intelligence?

If you have ever asked that question and are looking for an answer, here is all that you need to know. Let us begin…

How do we define memory and intelligence?

Any sort of information or data is stored, or let’s say encoded in our brain, is called memory, and the data or information can be retrieved whenever needed. It is retained overtime to influence future actions. Without memory, the development of language, relationships, and personal identification would have been impossible.

Memory is an informational system with explicit and implicit functioning, and it consists of sensory processors, short-term memory, and long-term memory, all related to the neuron. The data or information stored in memory might get corrupted by factors such as physical damage to the areas of the brain associated with memory storage or by decay within the memory. Hence we can say that memory isn’t a perfect processor.

Intelligence is the mental ability that helps to learn from experiences, adapt to situations, handle abstract concepts, and use knowledge to manipulate the surrounding environment accordingly. Cognitive processes, including perception, reasoning, and problem-solving, are effective adaptations of intelligence. Intelligence is also referred to as the intellectual power marked with complex cognitive feats, motivation, and self-awareness. Intelligence has several forms and types, which make its definition quite controversial.

Now that you fully understand how we interpret memory and intelligence and how the two terms are interrelated let us begin with the listicle of animals that are extremely intelligent and have an incredible memory.

Dolphins are known as one of the most intelligent animals in the world who can effectively solve complex problems and social interactions. Besides having the ability to learn as individuals, they can also pass their knowledge down to further generations. For example, the dolphins protect their snouts by attaching sponges on them while foraging for food, and the skill is passed down by the mother to the offspring.

The size of their brains relative to body size is larger than those of the chimpanzees, and the structure of their brains is different from humans and chimpanzees. The studies of scientists have shown that the dolphins have special spindle-shaped neurons called Von Economo neurons, or VENs, which aid in the intuitive assessment of complex situations, like interplay.

These VENs are housed in the anterior cingulate cortex, found only in a handful of species, and responsible for emotion, decision-making, and autonomic functions. Although it’s hard to quantify intelligence in any organism, dolphins significantly excel in intelligence-based tests. They also show mirror self-recognition, symbol-based communication, and an understanding of abstract concepts. All of this proves that they are one the most intelligent animals in the world with incredible memory.

The blue whale is an enormous living creature on the earth, with an average weight of around 200 tons (approximately 33 elephants). Blue whales appear to adopt a technique, which is improved by their remembrance. “These long span species are very intelligent creatures. They take their relocating judgments based on the possibilities when and where they can get the food during migration”. They use their memories to reach the delightful feeding spot. Hence they are truly intelligent animals with an excellent memory that helps them survive and find food.

However, the whales’ dependence on memory could make them susceptible to differences in the ocean caused by climate change. Blue whales have developed to use ancient migration paths and timing that helps them to reach the region with most predictably huge output feeding areas and accordingly make minor adjustments with local conditions. It can be obvious as they can consume 7,715 pounds of krill daily.

An Elephant is known as one of the most well-behaved creatures in the wild that significantly makes a powerful impression on other creatures or a human being. And these gigantic animals with an amusing appearance have been loved by people from all walks of life for generations. Elephants are known as extremely smart animals with superb memory. It is also said that an elephant never forgets a thing that is not entirely true, but they remember almost everything.

Among all the land mammals, elephants have the largest brain. They learn from their past experiences and can handle dangerous situations that might appear in the future. Their hippocampus and cerebral cortex are well developed, and these are responsible for willpower and problem-solving. Elephants can remember and recognize their clan members and other animals that left a strong impression on them.

Elephants also hold grudges against those who hurt them and remember the injuries caused by them. They also exhibit behavior like grief, mimicry, play, art, and self-awareness, which reveal their substantial intelligence.

Elephants live in groups, and when they are separated by death or capture, and when they encounter the remains of a dead elephant, they show signs of grief and touch the dead bodies and bones with their feet and trunks. 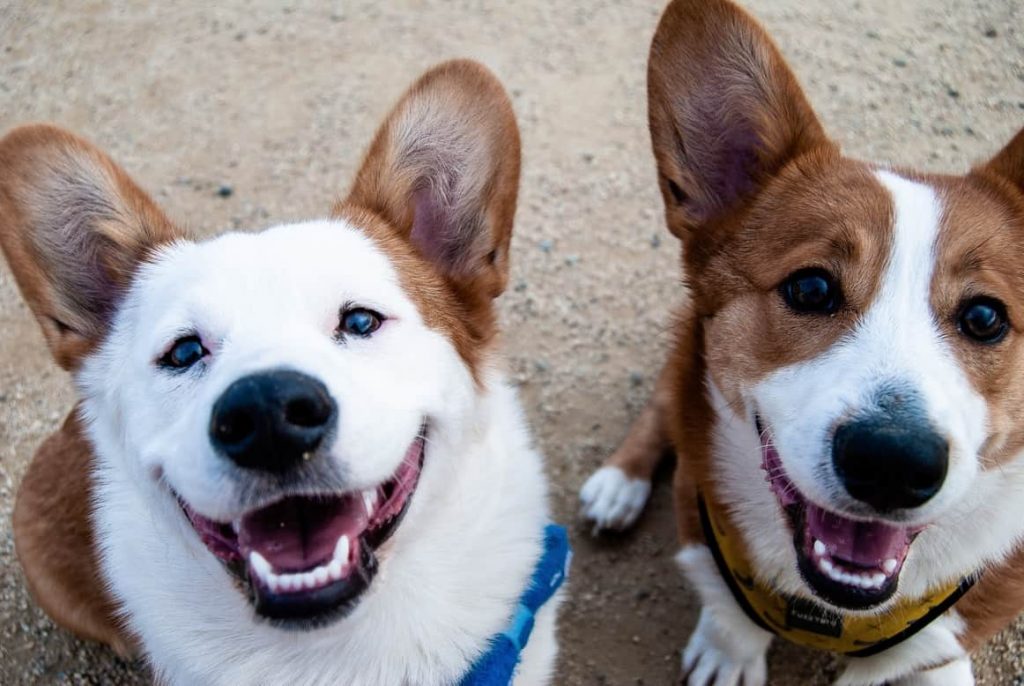 Dogs are one of the most loyal creatures that ever existed in this world. They are very clever, brave, and useful animals. The dog is gifted with a strong sense of smell, and it also has sharp eyesight. They are trained to hunt animals and even to detect criminals. Dogs are considered to be intelligent animals. Moreover, they have extraordinary physical abilities to serve humans.

Dogs have a very impressive memory that is excellent at remembering all kinds of stuff. It can be any kind of information or memories that their masters had with them. In fact, they remember about the people they have met in the past and the places they have been.

Their memory is so strong that when they get separated from their masters or their family, they recall and travel a long distance to reach their destination. This is proof that they have a long-term memory.

Monkeys and apes such as gorillas and chimpanzees are regarded as one of the most intelligent creatures in the world. There are about 200 species of monkeys covering many regions of the world.

A variety of species inhabit evergreen forests, while some of them live in Savannah and in the mountain regions. The monkeys are very intelligent, and as we have aforementioned intelligence, it allows for easy adaptation to different changes in the environment monkeys live in. They have mental maps, which help them to travel efficiently. The computer algorithm Spider Monkey Optimization is inspired by the intelligence of a Spider Monkey.

Monkeys have more cognitive flexibility than humans, making them willing to explore more efficient options to solve a problem. In a research, it was found that the spider monkeys ranked third in the overall intelligence among non-human primates, which makes them the cleverest monkeys of the Americas. 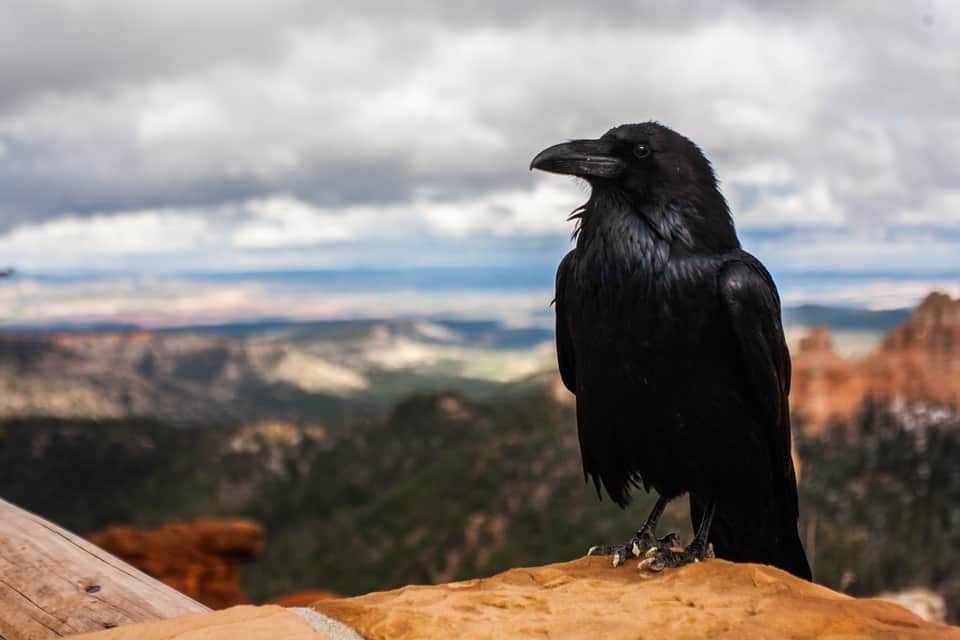 Raven is regarded as one of the smartest animals, and when it comes to intelligence, they even have higher intelligence than a chimpanzee or a dolphin. They use their intelligence wisely and apply it in their daily lives; for example, in the wild, they push rocks on people to keep them away from reaching their nests, playing dead beside a beaver carcass to scare other Raven away from a delicious feast.

Ravens hide their food in different places, and while hiding, if a raven knows that another raven is watching it hide its food, then they pretend to hide their food in one place but will actually hide it in another place, but the trick doesn’t work all the time because the other Raven watching it, is also a Raven. 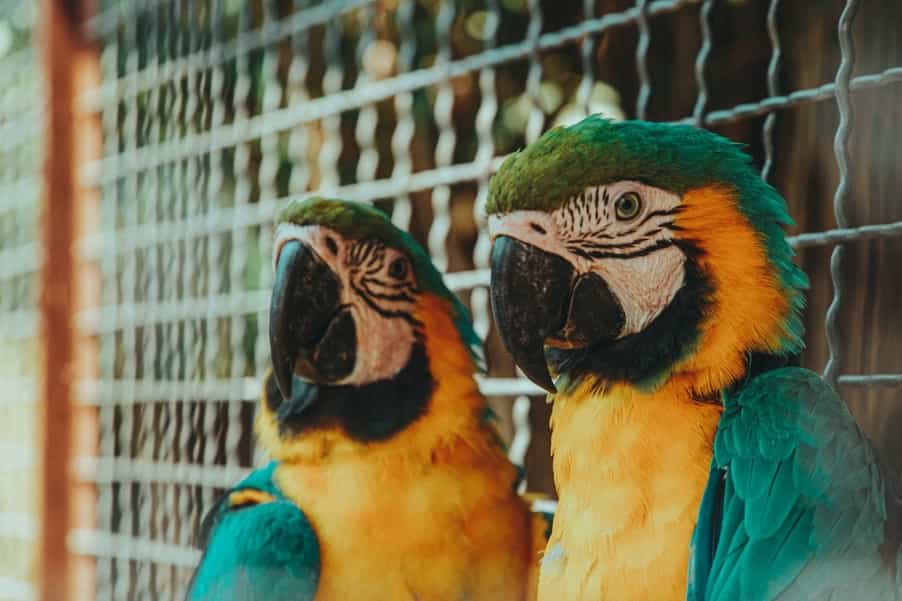 Parrots are known as one of the world’s favorite pets as they are colorful, highly social, intelligent, and long-living creatures. Their amazing memory and intelligence makes them smart, and they can learn well and learn fast. They learn to imitate sounds, and they can even learn and repeat more than 150 words and phrases.

They are capable of remembering their previous owners and recall their actions and act accordingly by being shy or aggressive. They use their memory to store locations and navigation paths to food sources available only once a year in the wild.

Their memory is superior to other animals as they navigate by memory. Their brains are bigger compared to the other birds, coupled with better communication skills. 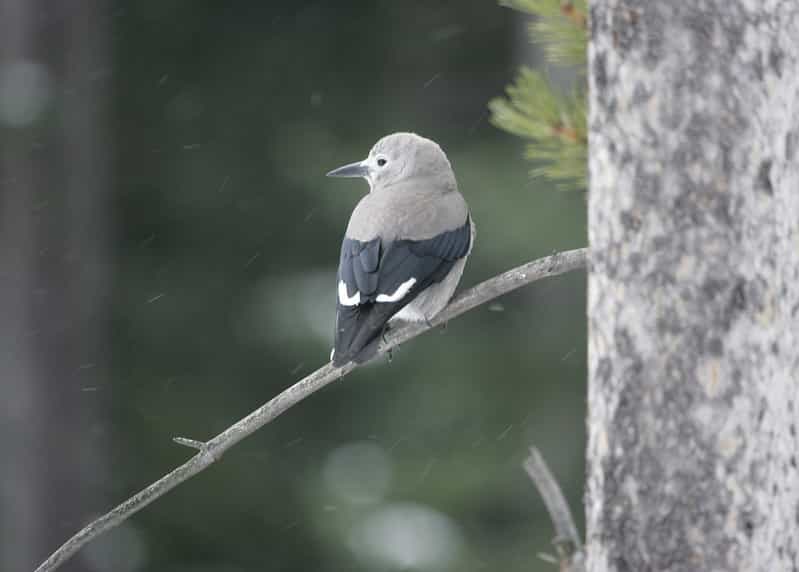 Clark’s Nutcrackers are conspicuous birds of the mountains. They fly in open subalpine forests with woodpecker-like swoops and perch on the vertical pine branches. They have a pale gray body with black wings and a tail which is black in the center and white along the edges of either side.

Their body size is similar to a jay, and they have the body structure of a crow, with a short tail, a rounded head with long, straight, and sharp-tipped bills.

Clark’s Nutcrackers hide around 50-80,000 seeds during each autumn, and studies have shown that they have a tremendous memory and they can remember approximately 20,000 different seed locations. An astounding feature associated with a Clark Nutcracker’s memory and brain is that while hiding the seeds in the autumn, the bird’s brain is swollen each time, and it shrinks back to the usual size when the bird ticks each seed off its list.